The news you have all been waiting for!

At the packed informal consultation meeting held at noon on 21st July 2018 the MCLT board announced the location of the proposed site. See the location in  Handout 2 provided at the meeting. 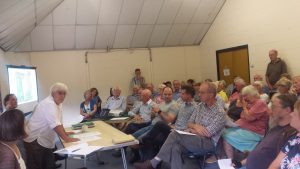 At the show of hands at the end of the meeting there was was overwhelming support for the MCLT board to move to a full feasibility study. There were some abstentions and no objections.